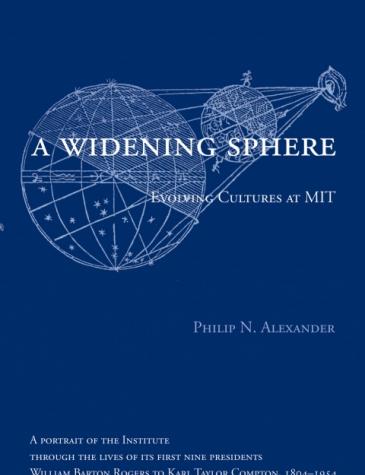 MIT was founded in 1861 as a polytechnic institute in Boston's Back Bay, overshadowed by its neighbor across the Charles River, Harvard University. Harvard offered a classical education to young men ofAmerica's ruling class; the early MIT trained men (and a few women) from all parts of society as engineers for the nation's burgeoning industries. Over theyears, MIT expanded its mission and ventured into other fields—pure science, social science, the humanities—and established itself in Cambridge as Harvard's enduring rival. In A Widening Sphere, Philip Alexander traces MIT's evolution from polytechnic to major research institution through the lives of its first nine presidents, exploring how the ideas, outlook, approach, and personality of each shaped the school’s intellectual and social cultures. Alexander describes, among otherthings, the political skill and entrepreneurial spirit of founder and first president, William Rogers; institutional growing pains under John Runkle; Francis Walker's campaign to broaden the curriculum, especially in the social sciences, and to recruit first-rate faculty; James Crafts, whose heart lay in research, not administration; Henry Pritchett's thwarted effort to merge with Harvard (after which he decamped to the Carnegie Foundation for the Advancement of Teaching); Richard Maclaurin's successful strategy to move the institute to Cambridge, after considering other sites (including a golfclub in Brighton); the brilliant, progressive Ernest Nichols, who succumbed to chronic illness and barely held office; Samuel Stratton's push towards a global perspective; and Karl Compton’s vision for a new kind of Institute—a university polarized around science and technology. Through these interlocking yet independent portraits, Alexander reveals the inner workings of a complex and dynamic community of innovators.

Philip N. Alexander is a Research Associate in the Program in Writing and Humanistic Studies at MIT and a Research Consultant for the MIT Black History Project. For over 35 years at MIT, he has investigated the history of science and medicine, and he has worked on biographies, exhibits, and other projects related to the history of the Institute. Alexander co-authored Mind and Hand (MIT Press, 2005).

“[Alexander's] highly readable new book is remarkable for the human interest that colors the institutional history...The author has an uncanny knack for unearthing and encapsulating telling details. The book achieves exactly the right blend of technical explanation and anecdote.”—Jeffrey Mifflin,, Historical Journal of Massachusetts

“A Widening Sphere is a deeply researched and well-written account of the MIT's first nine presidents. It is also something more—engaging and even inspiring—unexpected but greatly appreciated qualities for an institutional history.”
—Gerald Early, Merle Kling Professor of Modern Letters, Washington University in St. Louis