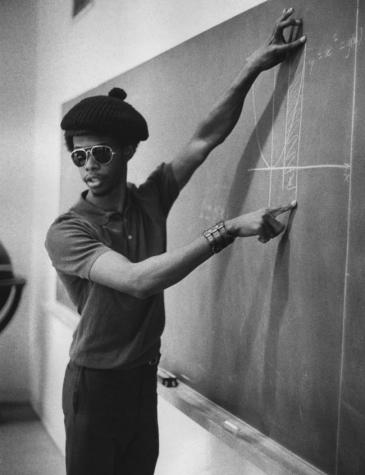 “Symmetry Principles in Selected Problems of Field Theory” was the first ever thesis devoted to spacetime symmetry or "supersymmetry" (SUSY).

There is a process called “Compton scattering,” which capped off our high school physics course and introduced me to the ideas of Albert Einstein...pretty remarkable, given that this was a segregated school in the South during the mid-to-late ’60s.

After MIT, Sylvester "Jim" James Gates, Jr. '73, PhD '77 went on to focus on string theory, an extremely mathematical view of physics, joining relativity and quantum mechanics. Today, he is a world-renowned theoretical physicist, well-known for his use of adinkras, West African geometric symbols, to develop graphical representations of supersymmetric algebras.

In 2013, Gates was among 12 scientists to be awarded a National Medal of Science. He served as Distinguished University Professor, University System of Maryland Regents Professor, John S. Toll Professor of Physics, and Center for String & Particle Theory Director at the University of Maryland. Currently, Gates has a dual appointment in the Department of Physics physics and with the Center for the Study of Race and Ethnicity in America at Brown University.