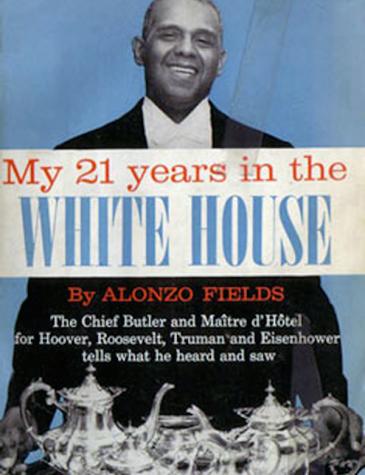 Alonzo Fields was a high-profile member of the MIT service staff during the mid-1920s who served as "house man" to MIT president Samuel Stratton during the 1920s. Fields went on to serve as Chief White House Butler at the White House under four Administrations. Fields wrote a memoir in 1960 and, in 2013, the movie The Butler was released. The main character in the film, Cecil Gaines, was based on the life of Eugene Allen, the man Fields hired to be his successor in the White House.

My 21 Years in the White House, first published in 1960, is the fascinating account by Alonzo Fields of his service as head butler under 4 presidents: Hoover, Roosevelt, Truman, and Eisenhower. Fields (1900-1994) began his employment at the White House in 1931, and kept a journal of his meetings with the presidents and their families; he would also meet important people like Winston Churchill, Princess Elizabeth of England, Thomas Edison, John D. Rockefeller, presidential cabinet members, senators, representatives, and Supreme Court Justices. He would also witness presidential decision-making at critical times in American history -- the attack on Pearl Harbor, the death of Franklin Roosevelt, the desegregation of the military, and the outbreak of hostilities in Korea. As Fields often told his staff, “...remember that we are helping to make history. We have a small part ... but they can't do much here without us. They've got to eat, you know.” Included are sample menus prepared for visiting heads-of-state and foreign dignitaries.