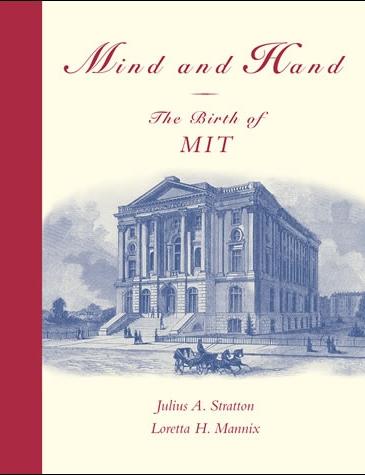 The motto on the seal of the Massachusetts Institute of Technology, "Mens et Manus"—"mind and hand"—signals the Institute's dedication to what MIT founder William Barton Rogers called "the most earnest cooperation of intelligent culture with industrial pursuits." Mind and Hand traces the ideas about science and education that have shaped MIT and defined its mission—from the new science of the Enlightenment era and the ideals of representative democracy spurred by the Industrial Revolution to new theories on the nature and role of higher education in nineteenth-century America. MIT emerged in mid-century as an experiment in scientific and technical education, with its origins in the tension between these old and new ideas.

Mind and Hand was undertaken by Julius Stratton after his retirement from the presidency of MIT and continued by Loretta Mannix after his death; Philip N. Alexander, of the MIT Program in Writing and Humanistic Studies, stepped in to complete the project. The combined efforts of these three authors have given us what Julius Stratton envisioned—"a coherent account of the flow of ideas" from which MIT emerged.

Philip N. Alexander is a Research Associate in the Program in Writing and Humanistic Studies at MIT and Research Consultant for the MIT Black History Project. For over 35 years at MIT, he has investigated the history of science and medicine, and he has worked on biographies, exhibits, and other projects related to the history of the Institute. Alexander is the author of A Widening Sphere: Evolving Cultures at MIT (MIT Press, 2011).

“This sweeping account of MIT's origins and earliest days captures the essence of a very special institution—its spirit of inquiry, innovation, openness, integrity, and academic excellence. As we face the opportunities and challenges of change that lie ahead, we have much to learn from this story of the Institute's emergence in response to unmet educational, technical, and industrial needs in mid-nineteenth century America.”
—Susan Hockfield, President, MIT

“A labor of sustained love and deep learning, Mind and Hand unearths MIT's rich multiple roots in the polytechnic models of France, the aspirations of the mid-nineteenth century's rising industrial technologists, the boosters of Boston, and the vision of its founders for science-based technical education. More than that, it is a kind of users manual for its time an insider's history of what it took to create and develop this urban university, including fund-raising and faculty recruitment, land acquisition and community support, and the friendly, creative competition with that other educational institution down the Charles River. Mind and Hand reveals just how much the MIT of today is mirrored in the story of its birth.”
—Daniel Kevles, Stanley Woodward Professor of History, Yale University

“Of all the innovations MIT has produced, none has been more influential than MIT itself, as the model for a new kind of technically-oriented higher education. This book is full of lively human details about the faculty and students of the early Institute, but its greatest strength is to put the story of MIT's founding in the larger context of regional, American, and world history. A readable and indispensable introduction to the origins—and still emerging destiny—of MIT.”
—Rosalind Williams, Director, Program in Science, Technology, and Society, MIT