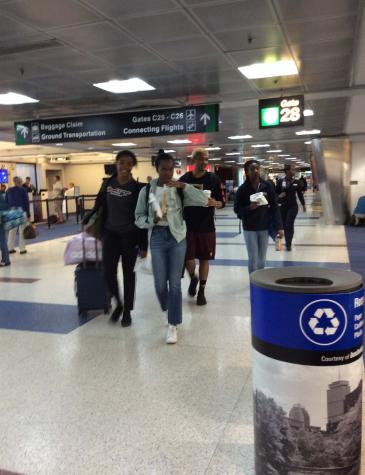 Journey Towards Making a Better World: In Celebration of the 50th Anniversary of The Founding of The Black Students Union at MIT, 2018

Early on Friday, 5 October 2018, 44 MIT undergraduates and seven faculty and staff lifted off on a flight from Logan International Airport, bound for our nation’s capitol. This historic trip to Washington, DC, was conceived as one of four major events in 2018 to celebrate the 50th anniversary of the founding of the Black Students Union (BSU) at MIT. While no one on this trip was at MIT 50 years ago, the Institute’s history is an often-­‐told story of discovery, knowledge creation, and innovation that everyone knew well, and that many personified.

The history of Blacks at MIT is intricately woven into the Institute’s rich fabric. With the founding of the BSU, MIT increased successful efforts at growing diversity and inclusion across the campus constituents of students, faculty and staff. The BSU endeavored to make this trip a journey of discovery that would increase participants’ appreciation of African American history and culture and strengthen their dedication to join forces with other groups on campus to further the notion of OneMIT and—in the words of President Rafael Reif—to help “make a better world.”

Judy “JJ” Jackson was named MIT’s diversity and inclusion officer in 2016. From 1989 to 2000, she served in multiple roles at the Institute: associate dean of undergraduate education and student affairs, director of the Office of Minority Education, ombudsperson in the President’s Office, and special advisor to the provost on faculty diversity. After leaving the Institute in 2000, Jackson held appointments in the administrations of Babson College, New York University, and Vassar College. In 2008, she joined the University of Kentucky, where she served as vice president for institutional diversity and associate professor before returning to MIT.

Jackson, Judy. "Journey Towards Making a Better World: In Celebration of the 50th Anniversary of The Founding of The Black Students Union at MIT". Report. Massachusetts Institute of Technology, Cambridge, MA. October 2018.