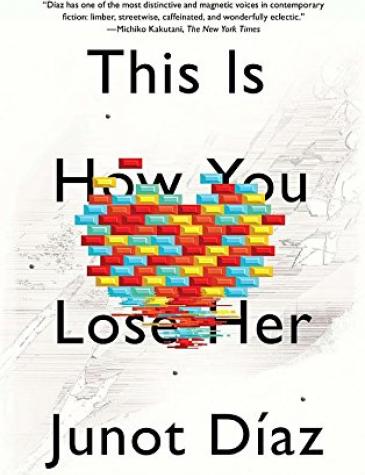 On a beach in the Dominican Republic, a doomed relationship flounders. In a New Jersey laundry room, a woman does her lover’s washing and thinks about his wife. In Boston, a man buys his love child, his only son, a first baseball bat and glove. At the heart of these stories is the irrepressible, irresistible Yunior, a young hardhead whose longing for love is equaled only by his recklessness--and by the extraordinary women he loves and loses.

In prose that is endlessly energetic, inventive, tender, and funny, these stories lay bare the infinite longing and inevitable weakness of the human heart. They remind us that passion always triumphs over experience, and that “the half-life of love is forever.”

“Junot Díaz writes in an idiom so electrifying and distinct it’s practically an act of aggression, at once enthralling, even erotic in its assertion of sudden intimacy… [It is] a syncopated swagger-step between opacity and transparency, exclusion and inclusion, defiance and desire… His prose style is so irresistible, so sheerly entertaining, it risks blinding readers to its larger offerings. Yet he weds form so ideally to content that instead of blinding us, it becomes the very lens through which we can see the joy and suffering of the signature Díaz subject: what it means to belong to a diaspora, to live out the possibilities and ambiguities of perpetual insider/outsider status.” –The New York Times Book Review

"Nobody does scrappy, sassy, twice-the-speed of sound dialogue better than Junot Díaz. His exuberant short story collection, called This Is How You Lose Her, charts the lives of Dominican immigrants for whom the promise of America comes down to a minimum-wage paycheck, an occasional walk to a movie in a mall and the momentary escape of a grappling in bed." –Maureen Corrigan, NPR

“Exhibits the potent blend of literary eloquence and street cred that earned him a Pulitzer Prize… Díaz’s prose is vulgar, brave, and poetic.” –O Magazine

“Searing, irresistible new stories… It’s a harsh world Díaz conjures but one filled also with beauty and humor and buoyed by the stubborn resilience of the human spirit.” –People

“These stories… are virtuosic, command performances that mine the deceptive, lovelorn hearts of men with the blend of tenderness, comedy and vulgarity of early Philip Roth. It's Díaz's voice that's such a delight, and it is every bit his own, a melting-pot pastiche of Spanglish and street slang, pop culture and Dominican culture, and just devastating descriptive power, sometimes all in the same sentence.” –USA Today

“In Díaz’s magisterial voice, the trials and tribulations of sex-obsessed objectifiers become a revelation.” –The Boston Globe

Junot Díaz is a professor of writing at MIT. His fiction has appeared in The New Yorker, The Paris Review, and The Best American Short Stories. His debut book, Drown, was met with unprecedented acclaim; it became a national bestseller, earned him a PEN/Malamud Award, and has since grown into a landmark of contemporary literature. His first novel, The Brief Wondrous Life of Oscar Wao, was published in 2007 and won the 2008 Pulitzer Prize. In 2012, the MacArthur Foundation awarded him a MacArthur Fellowship, popularly known as the "Genius Grant". Born in the Dominican Republic and raised in New Jersey, Díaz lives in New York City.