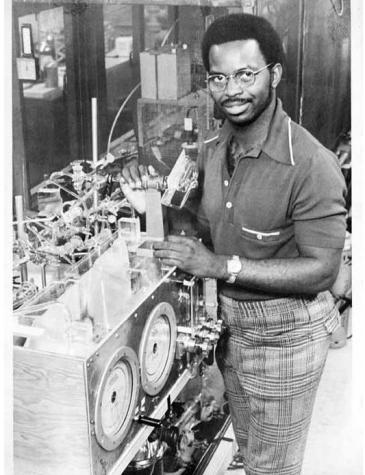 Studies are made of the energy flow into and among the vibrational degrees of freedom of polyatomic molecules due to vibration-vibration (V-V) collisions following intense laser excitation. These studies have been made theoretically, by computer analysis, and experimentally.

Simple closed form expressions are derived for predictting [sic] the energy absorbed by an oscillator from an intense saturating laser pulse. This analysis treats the regime where high vibrational excitation is accomplished via V-V exchange collisions. The fundamental results obtained employ the novel assumption of a time dependent quasi-equilibrium distribution existing among the upper vibrational states. This assumption is verified by detailed computer simulations.

A similiar [sic] formalism is applied to a simple polyatomic molecule with one mode under laser irradiaiton [sic]. Theoretical, computer, and experimental evidence are presented supporting the remarkable finding that: the energy absorbed by a polyatomic can be predicted by the simple expressions derived for a diatomic molecule....

The good agreement between the model predicted partitioning of energy and the measured energies prove that the modes equilibrate at different vibrational temperatures and that the energy flow path used is the dominant and most probable one. These findings manifest some of the heretofore unobserved behavior of polyatomics and their interaction with strong resonant laser pulses. In addition, new possibilities are opened in the areas of laser induced photochemistry and intra-mode and inter-molecular energy transfer lasers.

As a graduate student in physics, McNair went abroad to study laser physics at the Ecole d'Ete Theorique de Physique in Les Houches, France in 1975 as part of a collaboration between physicists there and at MIT. Near the end of his doctoral program, however, he lost two years' worth of data related to the laser physics research findings for his thesis. Undeterred and without complaint, McNair managed to produce a second set of data in under a year. "[T]he second set turned out better than the first set of data," his advisor and mentor Michael Feld told Ebony magazine in 1986. "This was typical of the way he worked to accomplish goals." McNair's novel research findings would be published as several pathbreaking scientific papers in the areas of lasers and molecular spectroscopy.

McNair went on to become the second African-American to make a flight to outer space. In 1985, he and eight other NASA astronauts lost their lives in the space shuttle Challenger accident. A year later, MIT renamed a campus building (37) in McNair's honor.