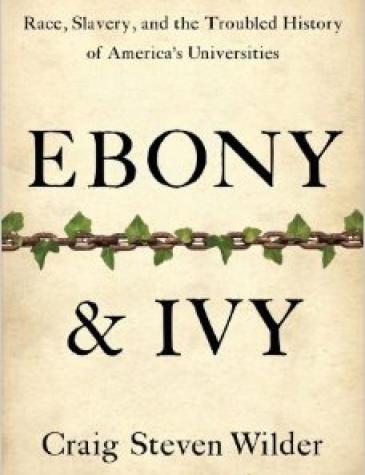 A 2006 report commissioned by Brown University revealed that institution's complex and contested involvement in slavery-setting off a controversy that leapt from the ivory tower to make headlines across the country. But Brown's troubling past was far from unique. In Ebony and Ivy: Race, Slavery, and the Troubled History of America's Universities, Craig Steven Wilder, a rising star in the profession of history, lays bare uncomfortable truths about race, slavery, and the American academy.

Many of America's revered colleges and universities-from Harvard, Yale, and Princeton to Rutgers, Williams College, and UNC-were soaked in the sweat, the tears, and sometimes the blood of people of color. The earliest academies proclaimed their mission to Christianize the savages of North America, and played a key role in white conquest. Later, the slave economy and higher education grew up together, each nurturing the other. Slavery funded colleges, built campuses, and paid the wages of professors. Enslaved Americans waited on faculty and students; academic leaders aggressively courted the support of slave owners and slave traders. Significantly, as Wilder shows, our leading universities, dependent on human bondage, became breeding grounds for the racist ideas that sustained them.

Ebony and Ivy is a powerful and propulsive study and the first of its kind, revealing a history of oppression behind the institutions usually considered the cradle of liberal politics.

Wilder’s unflinching look at the less-than-rosy histories of Ivy League institutions makes for a book that, according to the New York Times, “may not find a home on many alumni-office coffee tables." Kirkus Reviews named Ebony & Ivy one of the year’s best nonfiction books. It was the inspiration behind Grammy Award-winner Esperanza Spalding’s song “Ebony and Ivy” in Emily’s album, D+Evolution (2016).

Craig Steven Wilder is a historian of American institutions and ideas, and a professor of history at MIT, where he is former Head of History. He has advised and appeared in numerous historical documentaries, including Ken Burns’ “The Central Park Five,” which received the 2013 Peabody Award. Wilder is also the author of A Covenant with Color: Race and Social Power in Brooklyn (Columbia University Press, 2000) and In the Company of Black Men: The African Influence on African American Culture in New York City (New York University Press, 2001).