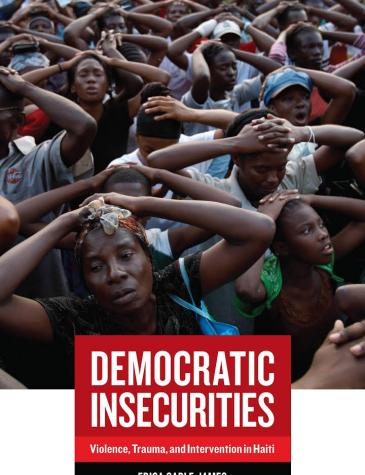 Democratic Insecurities focuses on the ethics of military and humanitarian intervention in Haiti during and after Haiti's 1991 coup. In this remarkable ethnography of violence, Erica Caple James explores the traumas of Haitian victims whose experiences were denied by U.S. officials and recognized only selectively by other humanitarian providers. Using vivid first-person accounts from women survivors, James raises important new questions about humanitarian aid, structural violence, and political insecurity. She discusses the politics of postconflict assistance to Haiti and the challenges of promoting democracy, human rights, and justice in societies that experience chronic insecurity. Similarly, she finds that efforts to promote political development and psychosocial rehabilitation may fail because of competition, strife, and corruption among the individuals and institutions that implement such initiatives.

“Haiti’s catastrophic earthquake follows a decade of crisis in governance and in everyday social life. Erica James’s powerful ethnographic study shows how insecurity has been created, victimhood shaped, and trauma mediated under long-term conditions of grinding poverty punctuated by periodic disaster and interventions both external and domestic. The international and unintended consequences have commodified suffering, institutionalized insecurity, and fashioned a troubling and troubled ‘democracy.’ This book is a major achievement!”—Arthur Kleinman, author of What Really Matters: Living a Moral Life amidst Uncertainty and Danger

"This is a remarkable piece of scholarship. Erica James has raised the bar as far as solid ethnographic inquiry in Haiti goes and draws on a diverse set of theoretical traditions in anthropology and in social theory. Her research will, I predict, open new doors."—Paul Farmer, Harvard University, founding director of Partners in Health

"Erica James' book is a vivid descent into the ordinary of violence and insecurity, of suffering and trauma, in a country that seems to have never completely recovered from past French exploitation and American imperialism. Based on an ethnography of neighborhoods as well as of aid agencies, the inquiry courageously questions our categories of thought and models of action to confront Haitian endless tragedies, from victimization to humanitarianism, bringing together, in an unprecedented analysis, what she calls the economies of terror and the economies of compassion."—Didier Fassin, author of When Bodies Remember

"Democratic Insecurities is a work of extraordinary depth that sets new standards on the themes of violence and social suffering. The power of the book lies in the great attention to historical and ethnographic detail of Haitian society and politics through which the doing and undoing of violence is rendered knowable as well as its command over social theory."—Veena Das, Johns Hopkins University

"James draws us in via an astonishingly vivid and unsettling account of her first weeks in Haiti. This book is a highly sophisticated, compelling, and instructive read and an outstanding example of ethnography by one of the leading anthropologists in the field of trauma."—Mary-Jo DelVecchio Good, Harvard University

Erica C. James is Associate Professor of Medical Anthropology and Urban Studies and Director of the MIT Global Health and Medical Humanities Initiative. Her work is focused on violence and trauma; philanthropy, humanitarianism, and charity; human rights, democratization, and postconflict transition processes; race, gender, and culture; and religion and healing.