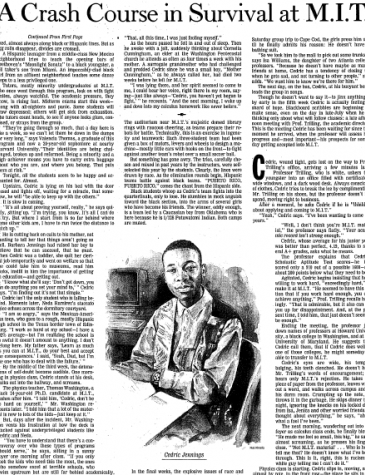 Ron Suskind, Staff Reporter of The Wall Street Journal, won the 1995 Pulitzer Prize in Feature Writing "for his stories about inner-city honor students in Washington, D.C., and their determination to survive and prosper". Among the three winning stories is "Class Struggle," which chronicles the experience of Cedric Jennings at MIT.

The experiences of a Washington D.C. high school senior in an MIT summer program for minority students has enveloped the program in a controversy with racial overtones, gaining attention in the national media.

Cedric Jennings, who is African American and lives in a poor and drug-ridden section of the city, attended the Minority Introduction to Engineering and Science program last summer.

MITES is a rigorous program that crams into six weeks what MIT freshmen go through in one semester, said Professor of Aeronautics and Astrophysics Leon Trilling, who is the academic adviser to the program. Students take classes in calculus, chemistry, physics, robotics, and writing, he said.

Trilling met with Jennings and other students toward the end of the program to advise them about college plans, in particular about applying to MIT. Trilling advised Jennings that his chances of admission to MIT were not good, and he should consider applying elsewhere, Trilling said.

Jennings charged that Trilling's remarks were racist and one of several articles about Jennings in The Wall Street Journal suggested that MITES catered to privileged minorities, prompting a response from President Charles M. Vest.

Jennings' life and experiences at the MITES program were chronicled in the articles and on a segment of the ABC television newsmagazine Nightline on Oct. 6.