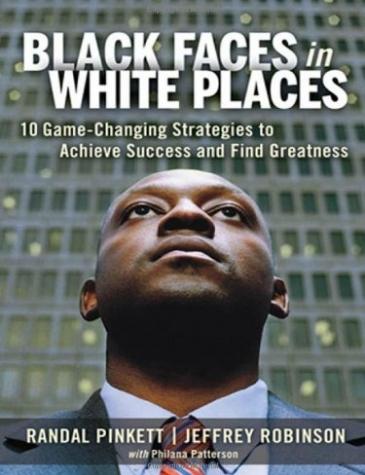 If the name Randal Pinkett sounds familiar, it may be because Pinkett was the first African-American winner on The Apprentice. When he won, this black man also became the only contestant to be asked to share his victory--with a white woman. The request (and Pinkett's subsequent refusal) set off a firestorm of controversy that inevitably focused on the issue of race in the American workplace and in society.

For generations, African-Americans have been told that to succeed, they need to work twice as hard as everyone else. But as millions of black Americans were reminded by Pinkett's experience, sometimes hard work is not enough. Black Faces in White Places is about "the game"--that is, the competitive world in which we all live and work. The book offers 10 revolutionary strategies for playing, mastering, and changing the game for the current generation, while undertaking a wholesale redefinition of the rules for those who will follow. It is not only about shattering the old "glass ceiling," but also about examining the four dimensions of the contemporary black experience: identity, society, meritocracy, and opportunity. Ultimately, it is about changing the very concept of success itself.

Based on the authors' considerable experiences in business, in the public eye, and in the minority, the book shows how African-American professionals can (and must) think and act both Entrepreneurially and "Intrapreneurially," combine their collective strengths with the wisdom of others, and plant the seeds of a positive and lasting legacy.

“Randal Pinkett and Jeffrey Robinson’s book has much to say about solutions to our challenges in the Age of Obama. Don’t miss it!” — Cornel West, Princeton University

“There are three types of people in this world: those who make the rules, those who follow the rules, and those who redefine the rules. Drs. Pinkett and Robinson have given us a revolutionary roadmap for people of color to accomplish the latter, and to do so in a way that benefits everyone.” — William H. Cosby, Jr., Ed.D., and Camille O. Cosby, Ed.D.

“An intriguing exploration into the personal, professional, and spiritual dimensions of being Black in 21st century America. If you care deeply about the future of our communities and our country, you should care about this book.”— Benjamin Todd Jealous, President and CEO, NAACP

“This book is a ‘must read’ to fully understand the Black experience in any professional setting. Black Faces in White Places takes a look at race and professional accomplishment in post-Obama America. Drs. Pinkett and Robinson interview entrepreneurs, corporate execs, educators, religious and community leaders to identify 10 clear strategies to be successful oneself–and to help others as well.” — Soledad O’Brien, Anchor and Special Correspondent, CNN

“The ‘10 Game-Changing Strategies’ in Black Faces in White Places are so powerful, so compelling, and so simple, it made me wonder why someone didn’t think of them sooner! Thank you, Dr. Pinkett and Dr. Robinson.” — Judge Glenda Hatchett

Randal Pinkett SM '98, MBA '98 PhD '02 is the co-founder, chairman and CEO of BCT Partners, a multimillion dollar management, technology and policy consulting firm based in Newark, NJ. A graduate of Rutgers University, he holds SM, MBA, and PhD degrees from MIT. As part of his PhD dissertation, Pinkett was a principal investigator on the Camfield Estates-MIT Creating Community Connections project, which brings computers and Internet connections to residents of the Camfield Estates housing development in Roxbury. In 2002, he was honored with an MIT MLK Leadership Award. Pinkett went on to become the Season 4 Winner of NBC's hit reality television The Apprentice with Donald Trump and served as an executive with Trump Entertainment Resorts in Atlantic City, NJ.