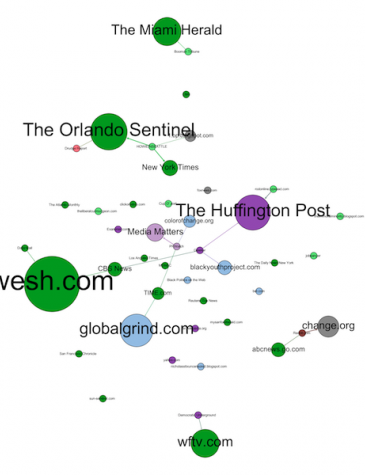 The battle for ‘Trayvon Martin’: Mapping a media controversy online and off-line, 2014

One of the biggest news stories of 2012, the killing of Trayvon Martin, nearly disappeared from public view, initially receiving only cursory local news coverage. But the story gained attention and controversy over Martin’s death dominated headlines, airwaves, and Twitter for months, thanks to a savvy publicist working on behalf of the victim’s parents and a series of campaigns offline and online. Using the theories of networked gatekeeping and networked framing, we map out the vast media ecosystem using quantitative data about the content generated around the Trayvon Martin story in both offline and online media, as well as measures of engagement with the story, to trace the interrelations among mainstream media, nonprofessional and social media, and their audiences. We consider the attention and link economies among the collected media sources in order to understand who was influential when, finding that broadcast media is still important as an amplifier and gatekeeper, but that it is susceptible to media activists working through participatory or nonprofessional media to co-create the news and influence the framing of major controversies. Our findings have implications for social change organizations that seek to harness advocacy campaigns to news stories, and for scholars studying media ecology and the networked public sphere.