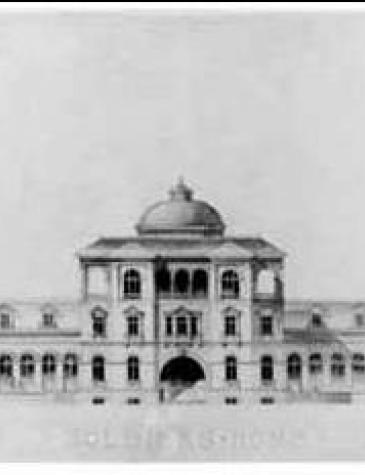 The first known black student to attend and graduate from MIT is Robert Robinson Taylor, Class of 1892. He is also considered to be the first accredited African-American architect. Taylor was recruited to teach at Tuskegee Institute by Booker T. Washington, who looked to model its curriculum after MIT’s. Known as a hard, productive worker, Taylor at went on to a brilliant 40-year career as a professor and architect at Tuskegee Institute. Taylor is the great-grandfather of Valerie Jarrett, Senior Advisor to U.S. President Barack Obama.

In addition to his overall academic record, Taylor's "promise of future usefulness" was evident in the subject he chose as a final project for his major in architecture (Course IV). His topic--"Design for a Soldiers' Home"--involved plans for a nursing or convalescent home for aged, infirm Civil War veterans--a segment of the population that was increasing rapidly in number and that had become a source of considerable social concern almost thirty years after the end of the war. The federal government had already begun to tackle the problem of long-term care for veterans facilities.

Taylor's thesis is comprised of handwritten text (eight pages) and two meticulously constructed architectural drawings. One drawing depicts the outside of the proposed building from front ground level, the other is a floor plan. In Course IV, graphics was paramount; each student's drawings were examined and critiqued by a jury from the Boston Society of Architects. The supplementary text accompanying drawings generally consisted of a brief statement regarding project rationale and design specifications. Taylor's statement was straightforward and to the point:

In view of the number of soldiers who fought in the late war now suffering from the infirmities of old age and thereby incapable of supporting themselves, the government purposes erecting a home where about two hundred may be cared for comfortably.

This home must have, at least, the following rooms, viz, parlors, libraries, dormitories, dining rooms, a large play-room, an entertainment hall and chapel, a dispensary, an operating room, an examining room, a convalescent room, laundries, and toilet-rooms.

In a building of this kind, the designer should keep several things prominently in his mind. He should have the different parts of his building well connected in order to allow free circulation; still, he ought not connect too intimately the hospital with parts of the building designed for other uses. Then, as the inmates of the home are infirm, he should use the greatest allowable area and as few stories as possible in order to avoid climbing several flights of stairs. For whatever purpose intended, he should have his rooms large, well lighted, and well ventilated.

Taylor showed a remarkable sensitivity not only to engineering detail but also to artistic aesthetics, to health concerns such as proper ventilation, and to the general comfort of inmates, staff, and visitors. This was no merely rectangular, functional design:

Entering under an arch sixteen feet wide in the middle of the officers quarters, a person ascends a flight of ten steps, and enters the vestibule ... from which he passes into either of the two rooms, twelve feet square, one on the right, the other on the left, or into the large hall. In this hall he sees four statues in niches, Corinthian pilasters on the sides of the four broad doors in opposite sides of the hall, a large cornice at the top of the wall enriched with frescoes, and a beautifully panelled ceiling.

It was an ambitious plan, undoubtedly more elaborate than anything the federal government would have been willing to adopt for this purpose. The overall scheme reflected both the style of large French institutions and the problems studied and taught at the Ecole des Beaux Arts in Paris, where many members of the architecture faculty at MIT had been trained.