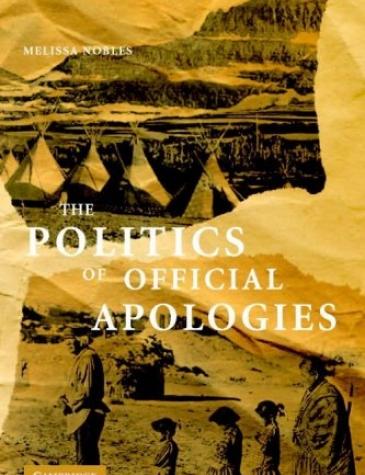 The Politics of Official Apologies, 2008

This book examines the political uses of official apologies in the United States, Australia, Canada, and New Zealand. Nobles explores why minority groups demand such apologies and why governments do or do not offer them. She argues that apologies can help to alter the terms and meanings of national membership. Minorities demand apologies in order to focus attention on historical injustices, the rectification of which, they argue, should guide changes in present-day government policies. When employed by political actors, apologies play an important, if under appreciated, role in bringing certain views about history and moral obligation to bear in public life.

This is a very interesting book on a compelling topic. Nobles makes a strong case that official apologies are under-appreciated and are worthy of sustained analytical attention. The book is well researched and written, solidly grounded in the relevant literatures, and innovative in its approach to its important subject matter. It is an accomplished and influential book that will have a substantial impact.

A book with interdisciplinary appeal, Melissa Nobles' The Politics of Official Apologies injects a sustained comparative dimension into the international discussion about the public use of history. The tension between nation-building elites and indigenous minorities who stubbornly refuse to assimilate is shown to renew the political culture of nation-states by questioning the terms of civic inclusion. At once intellectually rigorous and morally sensitive, Nobles' book demonstrates the potency of symbolic politics surrounding official apologies in Anglophone settler societies.

A. Dirk Moses, University of Sydney