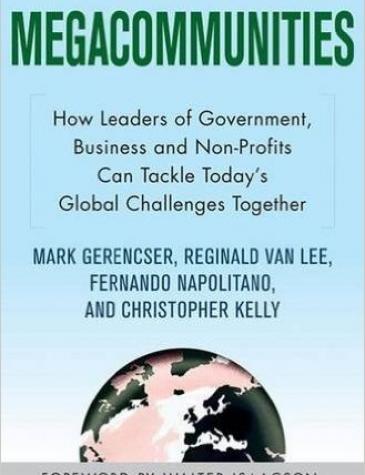 A hurricane strikes a city; terrorists attack a nation; global warming threatens the environment--such problems are too large for any one authority to solve alone. Our increasingly globalized and interconnected world calls for a new type of tri-sector leadership in which business, government and nonprofits work together in a state of permanent negotiation. To be effective, tomorrow's leaders will need to reach across national and sector divisions to form a collaborative "megacommunity."

Based on interviews with over 100 leaders from around the world including Bill Clinton, Henry Kissinger, Kenneth Chenault and Richard Parsons, Megacommunities: How Leaders of Government, Business and Non-Profits Can Tackle Today's Global Challenges Together introduces a radically new framework for reaching solutions to today's thorniest problems. Written by four senior consultants from global consultancy Booz Allen Hamilton, and with a Foreword by Walter Isaacson, this important book explains how a megacommunity approach is:

CONSERVING THE ENVIRONMENT AND ENERGY
In saving the world's rainforests, providers, distributors, sellers, and consumers of lumber team up with local communities, the World Wildlife Fund, and Goldman Sachs.

"What is required are leaders who know how to identify the vital interests they share with others, who are prepared to seek the benefits from which all can gain," write the authors.

“An optimistic handbook for creating promising frameworks for change that balance ideals with realities, the perfect with the good.” ―Harvard Business Review

“This is one of those rare well-reasoned books that can make a real difference.” ―Richard D. Parsons, Chairman of the Board and CEO, Time Warner

“Simply put, these concepts work. We'll be applying the methods explained in this important book even more ambitiously in the months ahead.” ―Newt Gingrich, former Speaker of the U.S. House of Representatives, founder of the Center for Health Transformation

“Megacommunities offers pragmatic advice, born from case studies and the broad experience of many leaders.” ―Curt Struble, Former US Ambassador to Peru

“Megacommunities introduces us to a world of complex problems, where traditional economic and financial incentives are not sufficient, where it is impossible for all players to secure their first choice outcome. And where multiple vetoes operate and free riders abound. This world calls for creativity and imagination, the ability to build trust, form alliances and do deals. Megacommunities also provokes a rethink about how we identify and develop our political, business and civic leaders -- people who can think across the boundaries of their own organizations, can communicate, can influence and be influenced, who think in terms of optimizing rather than maximizing, and who, in short, can pilot us from the selfish world of the Prisoner's Dilemma to the collaborative world of John Nash's Equilibrium.” ―Lord Andrew Turnbull, Former UK Cabinet Secretary and Head of the Civil Service

“As the new President and CEO of Common Cause, an organization that works to ensure that the political process serves the public interest, I wholeheartedly agree that progress in business, government and civil society must be attained through citizen-centered multi-lateral solutions. In our near 40-year history of reform work, Common Cause has long believed that engaging a diverse citizenry as well as a wide array of coalition partners is the most effective path to significant change, and Megacommunities captures that well.” ―Dr. Robert W. Edgar, President and CEO, Common Cause

“As the modern world has become more interdependent and global, the magnitude and complexity of the problems facing society have also grown. The ability to manage highly dispersed people and operations while responding to unusual problems and crises requires new tools and new leadership approaches. This important and incisive book illuminates how the mutual self-interests of actors in private, public and non-governmental organizations can be harnessed to develop shared approaches to dealing with very complex challenges in such disparate areas as economic strength, national security or broad health or environmental issues. The Booz Allen authors’ concept of 'megacommunities' as an organizing principle for managing collaboratively across traditional functional boundaries -- and thereby transitioning from a hierarchal management structure to one characterized by networks of networks of experts -- has wide applicability. It is a critical new tool for today's leaders – and tomorrow's.” ―Denis A. Bovin, Vice Chairman, Investment Banking, Bear, Stearns & Co. Inc.

“The complex issues of today's world have finally a strategic solution. The post globalized world calls for tri-sector leaders to acknowledge how the traditional sphere of influence and competences have changed and conflicts are even more complex that anyone can do it alone. Megacommunities cuts through the complexity with precise path to leadership.” ―Andrea Ragnetti, Member of the Board of Management of Royal Philips Electronics and CEO of Philips Consumer Lifestyle Sector

“Megacommunities urges leaders -- from business and government and civil society -- to come together to head off emergencies...Readable and thought-provoking, Megacommunities offers examples of how the approach has worked in cases around the globe, usually in an ad-hoc fashion, and shows how leaders from all spheres can make common cause in the service of the global community. It makes a strong case for business leaders taking the first steps toward solving the most daunting predicaments -- and toward solving that leadership crisis.” ―Matthew Budman, Conference Board