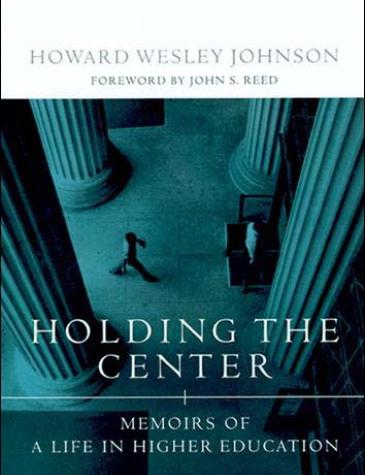 Holding the Center: Memoirs of a Life in Higher Education, 1999

Howard Wesley Johnson was the 12th president of MIT (1966-1971). Johnson "drew upon his management acumen to guide the Institute during the tumultuous late 1960s," according to MIT News. "Johnson gained respect for listening to all sides and for combining progressive views on issues such as Vietnam and the environment with expertise in management."

Holding the Center tells two engrossing stories. One is Howard Johnson's personal journey from the South Side of Chicago to the presidency of one of the most prestigious universities in the world; a journey that transited the Great Depression, military service in Europe and World War II, and a circuitous climb to the peak of higher education. The other story recounts his experience as President of MIT in the late 1960s and 1970s when MIT, like other American universities, was wracked by student and faculty dissent growing out of opposition to the Vietnam War and a profound shift in cultural attitudes. An understanding of Johnson's personal values and life experiences helps to explain how he skillfully managed the potentially explosive forces in a way that preserved campus comity and the integrity of the institution. Together, these two stories make an absorbing, and even inspiring, narrative which tells us much about higher education—and American—during a period of turbulent change.

Long-lasting changes accomplished during Johnson’s administration include: the creation of the Undergraduate Research Opportunities Program (UROP) and the Independent Activities Period (IAP); and the change from full-letter grades to pass-no credit for freshmen.

Prior to his presidency, he served seven years as dean of the Sloan School of Management. After his presidency, Johnson served as chair of the MIT Corporation from 1971 to 1983, becoming a Corporation Life Member Emeritus in 1997. He served on numerous governmental panels and as a trustee or director of such institutions as the Federal Reserve Bank of Boston, Radcliffe College, the Museum of Fine Arts and the Boston Symphony Orchestra.

Howard Wesley Johnson has been associated with MIT for more than forty years and been a major influence on the modernization and expansion of many of its programs. He will be most remembered as a management educator and as MIT's president during the turbulent late 1960s and early 1970s. The title of his memoirs reflects his central, usually lonely position in those days, trying to hold together an institution often torn apart by the turmoil of the times.Johnson was more successful at navigating the minefields on campus than were many other college and university presidents, perhaps because he was always willing to listen to both sides and because his values were in the right place—against the war in Vietnam, in favor of increased participation in the university by women and minorities, and concerned about environmental issues.As a professor and administrator at MIT, a corporate director, and an advisor to American government agencies and to museums and foundations, Johnson consistently sought both to understand and to apply the principles of good management.