John William Brean '51 (non-degree) was a graduate of Northeastern University. During World War II, MIT increased its recruitment of women and black research staff for service at the Radiation Laboratory and other wartime emergency units. Brean worked as a technician in the Rad Lab's DIV 9, Airborne Systems, during which he participated in a 1944 Pentagon Demonstration of radar plot bombing technique. Brean was promoted to staff member after the war.

The Pentagon Demo and Jim Crow

Segregation's effect on science--and on John Brean and his team--is most evident in a report submitted by John E. Ward '43 in 1987 to accompany a chart of aircraft ground tracks he was doing at the MIT Museum. Entitled "Explanation of 1944 Washington Radar Plot," the report describes an equipment demonstration at the Pentagon by MIT Radiation Laboratory personnel in July of 1944. Though mostly technical in nature, the report also includes Ward's personal reminiscences about the trip, the people involved, and the group’s firsthand experience with Jim Crow:

The four-vehicle convoy set out early on a July 1944 morning from MIT...[W]e had supper in a diner just on the New Jersey side of the George Washington Bridge, and breakfast the next morning at a diner between Baltimore and Washington. At the latter, we found our first racial segregation, although there was much more to come. Technician John Brean was black, and none of us could be served as long as he was with us in the diner. He therefore had to wait in the truck and we brought him a take-out breakfast...

During our stay in Washington, all of the group except John Brean was billeted at the Wardman-Park Hotel (now the Sheraton Park). Since he could not stay there, a space for him was found at a black hostelry, the White Law Hotel. He also could not eat with the rest of us in any Washington restaurant, except those in the Pentagon. Thus he was pretty much by himself when off duty at the Pentagon site. He must not have been lonely, however. As we went to pick him up on the day of our leaving, a large number of people came out of his hotel to wish him farewell. 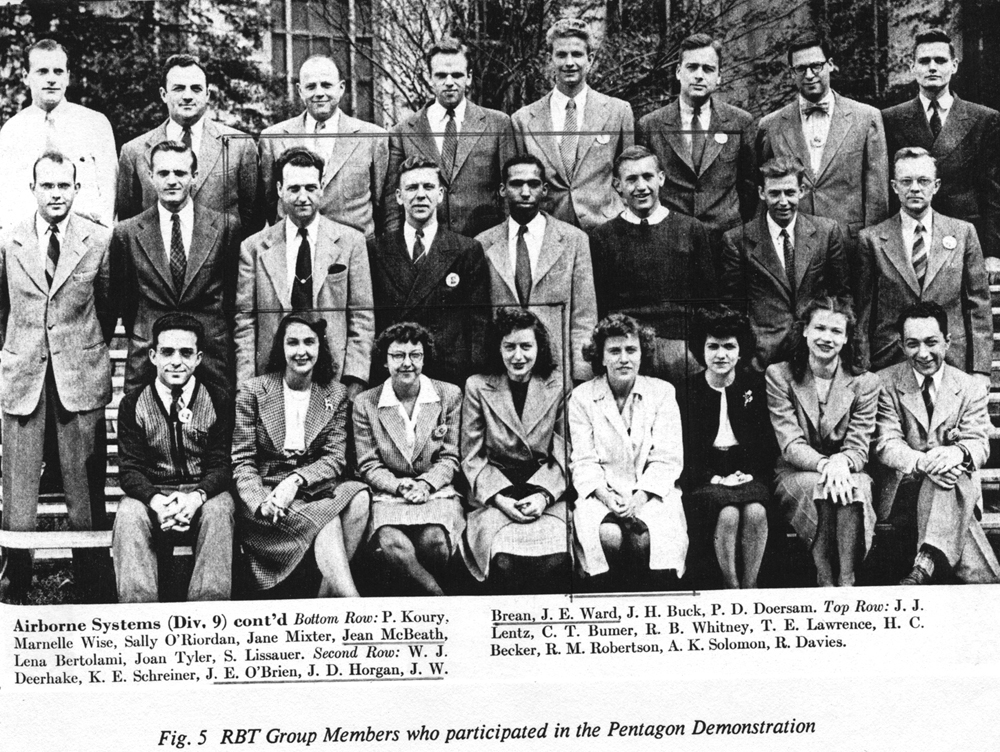